According to Yole’s latest market research report, the global RFFE (RF Front-End) market for telecom infrastructure is expected to be worth USD $2.52 billion by 2025, growing from USD $1.47 billion in 2018. In a global flattening telecommunication industry, this segment is showcasing a steady growth of 8% CAGR during the forecast period.

According to Yole, this growth is a result of value diversion from the system level to the RF component level through the AAS (Active Antenna Systems) evolution. The evolution of the RFFE industry is directly linked to the macroeconomic and technology trends at the system level that are themselves directly linked to market trends at consumer level for operators. That is why, today, telecom megatrends including 5G implementation strongly impact the RF FE industry and its supply chain with drastic technical changes, in terms of communication frequencies and power levels.

The Yole Group of Companies including Yole and Knowmade updated its dedicated collection of RF electronics reports with the release of two new reports: Active and Passive Antenna Systems for Telecom Infrastructure report and Antenna for 5G and 5G-related Applications Patent Landscape report. These reports tell us about the status of the antennas industry, the mega trends’ and their repercussions on the market. They also cover how antenna companies manage their activities and their development, especially at the patent level. Yole and Knowmade analysts have delivered a relevant snapshot of this ecosystem.

5G wireless communication, expected to hit the market by 2020, will be the next mobile technology standard. As a broad market, its deployment has strong repercussions on the current RF industry with the development of many innovative technology blocks and so the deployment of new infrastructures supporting specific protocols and operation modes, such as MIMO, Massive MIMO, beamforming, beam steering, carrier aggregation, and others.

According to Paul Leclaire, Technology & Patent Analyst, Knowmade, ever since its inception in 2014, the number of 5G-related patent publications has seen a huge increase. Knowmade sees a 113% growth rate between 2014 and 2018. This strong acceleration is mostly pushed by the Chinese IP players, which account for more than 56% of the IP activity in this sector. In particular, there have been a large number of Chinese academic players, which is quite unusual in the telecom domain.

Today, the IP landscape related to the development of 5G antennas is still unsettled. With more than 75% of patent applications still pending, much will change in the coming years. Indeed, after an initial period of domestic patent applications, the main IP and market players including Samsung, Intel, Ericsson, and Huawei have begun extending their portfolios worldwide. Samsung and Intel appear to be the two leaders currently best-positioned to limit their main competitors’ patenting activity and freedom-to-operate, according to Knowmade. 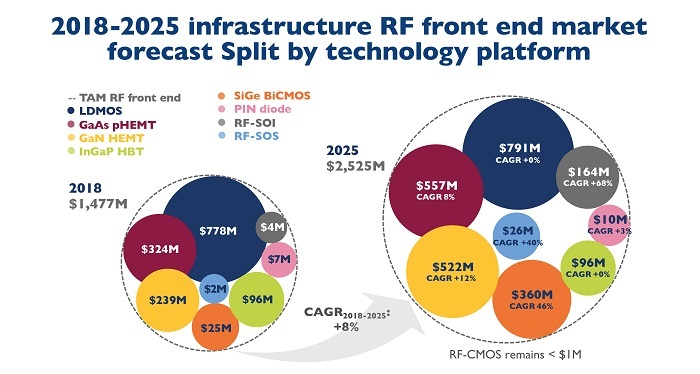 From a technical point of view, the leading technology platform is LDMOS. This will remain the case for the next several years. However, LDMOS is not expected to see any significant growth despite an increase in component volumes shipped. Yole expects an almost null CAGR in a market growing by 8% on average between 2018 and 2025. On the other hand, other platforms such as GaN, GaAs, SiGe or RF-SOI will see significant growth in the near future.

One of the most interesting dynamics in this matter is the expected evolution of the GaAs platform. With the arrival of AAS, a higher number of low power broadband power amplifiers will be needed, as well as new components such as beam-formers. These components are expected to be made mostly on the GaAs platform at first, especially for performance reasons. It provides the right performance level in a market for which no failure is allowed. But once the market has grown enough to be considered larger than a niche, other technologies like RF-SOI or SiGe are expected to replace GaAs, the same way GaAs has been replaced in the mobile phone industry. GaAs will be a transition platform for active antenna components.

Unlike the mobile phone industry, RF front end (RFFE) component manufacturers in the telecom infrastructure industry are numerous and specialized. A lot of different technological platforms are used, leading to a wide variety of components being available. In this fragmented industry, very few acquisitions have been seen lately and there has been little investment in start-ups, states Yole. This is due to the fact that the industry is still unsure about the choices telecom operators will make in terms of deployment.

A noticeable example has been CMCC (China Mobile Communications Corporation), which has changed technological orientation twice over the past few years. It was first interested in 64 antenna element AAS, thus motivating the industry to develop components with RF power amplifiers in the 5W range. But then CMCC went back to a preference for 32-element systems for cost reasons, rendering the developed elements unsuitable. Now CMCC has again started to go back on its plans of large scale implementation of AAS in favor of a more standard, lower cost RRH-based deployment.

The Chinese telecom giant also decided to not opt for frequencies above 3 GHz in the near future thus completely changing the perspective for GaN device developers like, Sumitomo. All these strategic changes impact technology development and create huge uncertainties in the industry. This market will first need to know which direction will be chosen by telecom operators before being able to consolidate.

KP Performance Antennas, has released a new series of 900 MHz Omni-directional antennas that are ideal for utilities, SCADA... read more

Molex Gets Recognition for Developing an Innovative Antenna Solution for Cars

Molex, an automotive Tier 1 supplier of end-to-end data solutions, has been selected by the editors of Autonomous Vehicle... read more

Dutch-Chinese Radio Telescope Unfolds its Antennas Behind the Moon

At MWC19 Los Angeles, the Antenna Company, a specialist in the design of high-performance embedded antennas, showcased the first... read more